Modeling and analysis for clearance machining process of end mills 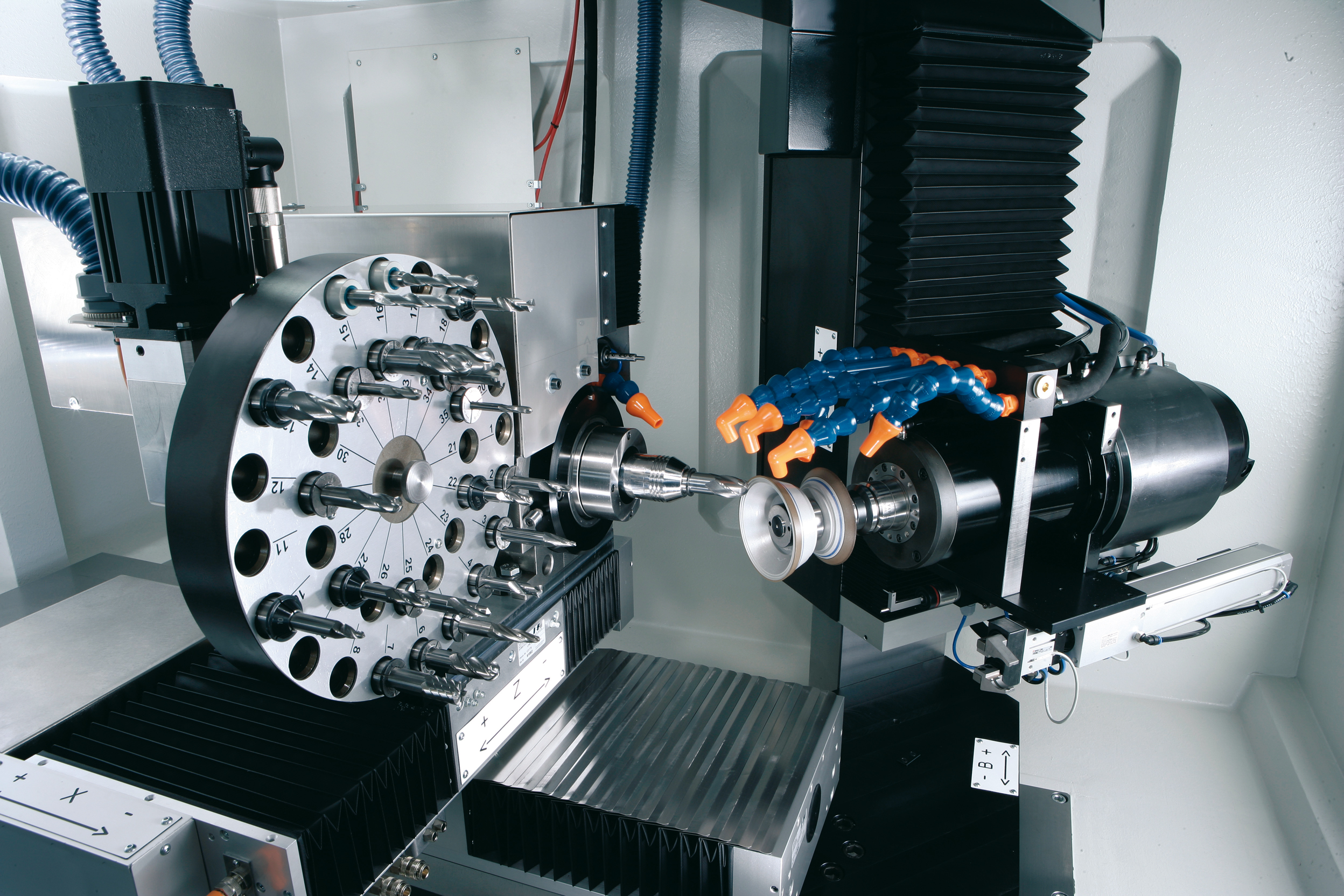 Clearance of end mills has great impact on the performance of milling, and therefore a high demand for its machining theory and process is put forward. Based on the analysis of practical machining process, enveloping theory, principles of spatial geometry are introduced to establish the clearances processing model, as well as considering the geometries, orientations, and locations of wheels used to machine the clearances with convex, eccentric, or elliptic shapes. Accordingly, limitations of wheel geometry and location to machine a desired clearance are discussed. A commercial computer aided design system with API function programming is used to visualize the machining process. The solid model is finally obtained.

Clearance is one of the most important structures of end mills. It influences the intensity and sharpness of cutter edges, the end mill life as well as the quality of machined surfaces. However, the research on the end mill manufacture process has mainly focused on the helical groove grinding processes. There is little analysis on clearance grinding process.

In many cases, clearance was designed and calculated in the groove design process, based on the assumption that it was a straight line at the cross section of end mills. Obviously, clearance models built with this approach could not reflect the actual processing precisely. With different research ideas, Chong described the re-sharpen processes for clearances of end mills. The principle of eccentric clearance re-shaping process was emphasized, including the re-shaping order, the position of end mill, wheel, and tooth rest. Based on a five-axis CNC tool grinder, Chen et al. planed the grinding processes of clearance by using a tool grinding CAM system. Translation and revolution sequences of every grinder axis in flat, concave, and eccentric machining process were introduced. Uhlmann et al. machined several clearance faces with cup-shaped grinding wheels and discussed the influence of the diamond grain size of the used grinding wheels. Besides, the clearance processing technology has been mentioned by some other researchers. However, these studies have not provided details of how to establish the mathematical model of clearance machining process.

According to the difference of wheel types and grinding processes, the clearance geometry of end mill is generally divided into three kinds: flat, eccentric, and convex (Fig. 1). The flat clearance is the most common shape of end mills. As shown in Fig. 1a, cup or cone-shaped wheel is used and the relative position to the end mill is shown. At the beginning, the wheel axis (n1) is perpendicular to the end mill axis. To avoid the phenomenon of grinding burn caused by the overlarge contact area, the wheel is then rotated. Therefore, the flat clearance is mainly ground by the wheel circumference. The eccentric clearance has a higher intensity and a longer end mill life than the other two shapes. It is generally machined with a cylinder wheel, whose axis (n2) is coplanar with the axis of end mill (Fig. 1b). To grind a clearance angle, there must be a certain angle (φ2) between the two axes. The convex clearance has the minimum intensity. On the other hand, it has the easiest machining process. Fig. 1c gives the wheel position relative to the end mill. The wheel axis (n3) is parallel to the end mill axis and its location could be deduced by the clearance angle α0.

In practice, the grinding process of the clearance face is usually done from shank side to end teeth. In order to calculate conveniently, all of the process is beginning at the end teeth in this paper, which will not influence the machining result.

and the wheel location can be expressed by

According to the wheel position provided in Fig. 1b, coordinates are built to express the initial positions of wheels to start the machining process (Fig. 4). The parameter φ2 is the rotational angle of the wheel frame about its Xg-axis. The wheel orientation can be given by the vector

and the wheel location can be expressed as 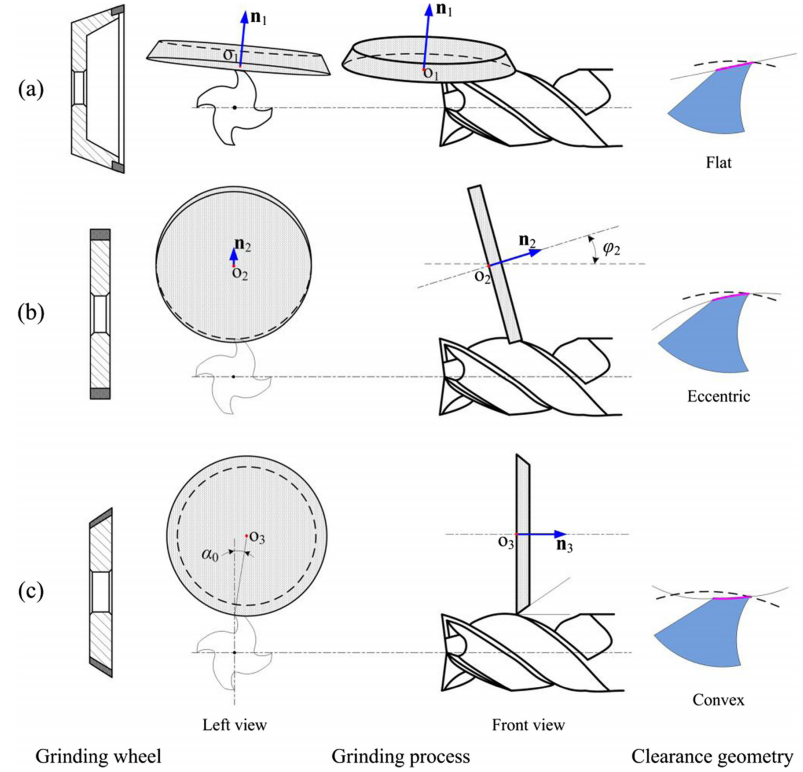 Obviously, two problems can be observed from the figure: the envelope surface boundary (i.e., the clearance face boundary) is not coincided with the cutting edge and the unwanted machining face will affect other teeth when Φ’>Φ. Besides, the inclination angle φ2 and clearance angle α0 could not be calculated so far. To solve these three problems, further study is detailed in the following sections.

From Fig. 5b, it is learned that the envelope surface boundary will overlap with the cutting edge, as long as the point p1 is located on the cutting edge. Based on Eqs. (3) and (4), the cylinder face of the wheel as shown in Fig. 4 can be represented in this form by 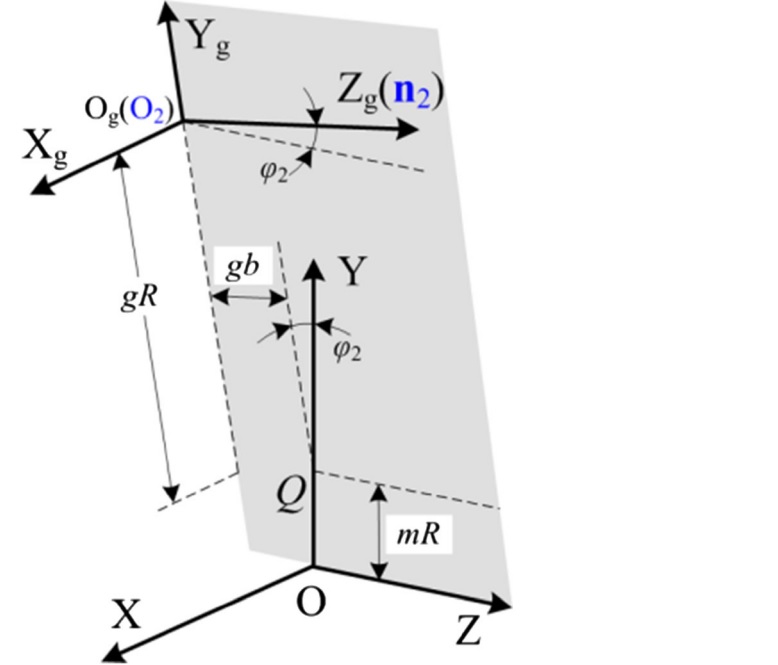 Then, a family of wheel surfaces can be obtained by moving the wheel along the cutting edge with a constant lead P and expressed as

where t represents the rotation angle that the wheel moves around the end mill axis. According to the principle of envelope, the fundamental relationship for the clearance machining is formed as

It can be simply denoted as 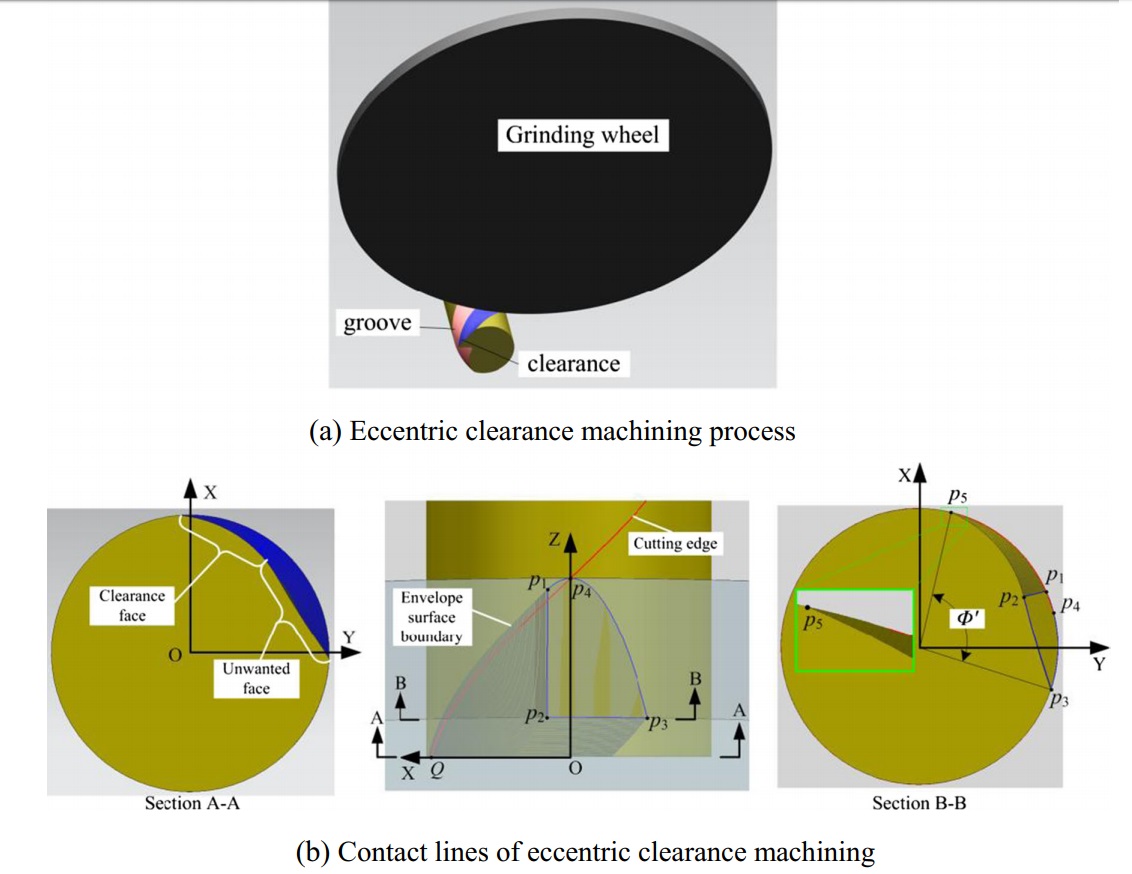 Substituting Eq. (8) and t=0 into Eq. (6), the contact line (i.e., line p1p2) of the wheel and the clearance at the initial processing position is obtained in the form

Finally, the coordinates of p1 (xp1,yp1,zp1) could be calculated by solving the equation x 2 gt(t=0)+y 2 gt(t=0)=mR2 . In order to make the envelope surface boundary coincide with the cutting edge, the point p1 must be moved to point p4 at the beginning (i.e., t=0 and point p4 coincides with point Q). Therefore, before the machining process, the wheel should

rotate and moves along the Z-axis from the frame XgYgZg (as shown in Fig. 4) with an angle λ and a displacement |zp1|. Where, λ is the angle between X-axis and the projection line of Op1 on the cross section of end mill, which can be shown as 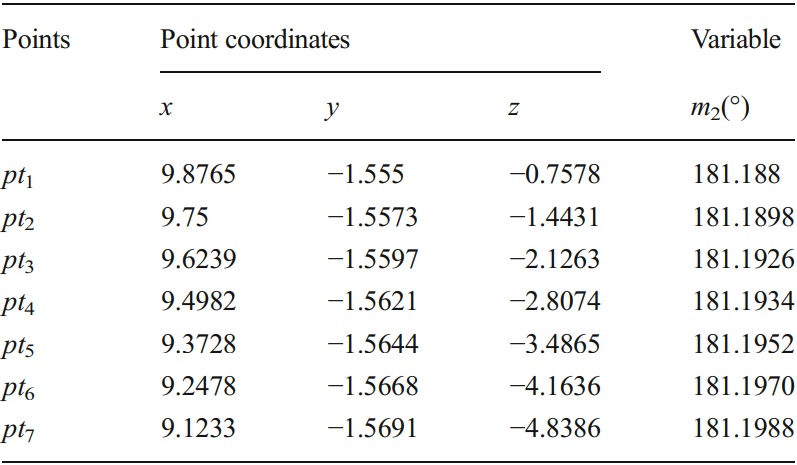 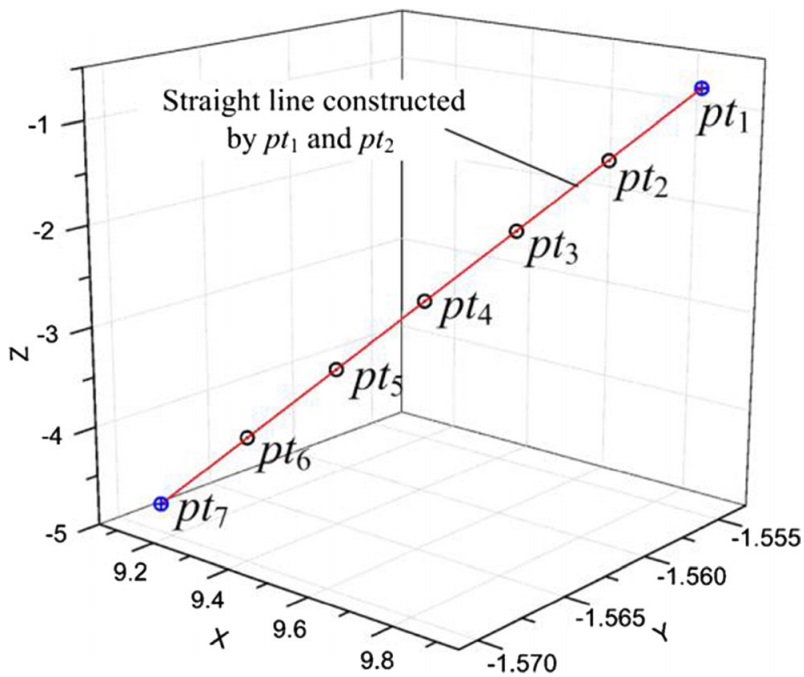 4.3 Definition of the inclination angle

Substituting parameters listed in Table 1 into Eq. (9), the points on the contact line could be calculated. The results are shown in Table 2. Figure 6 shows the positions of points in a three-dimensional coordinate. Connecting the first and last point (pt1 and pt7) with a straight line, it is found that all of the other points lie in the line, which means that the contact line is also a straight line.

According to Fig. 5b, the relationship between φ2 and α0 is expressed in Figs. 7, and the following equations are concluded: 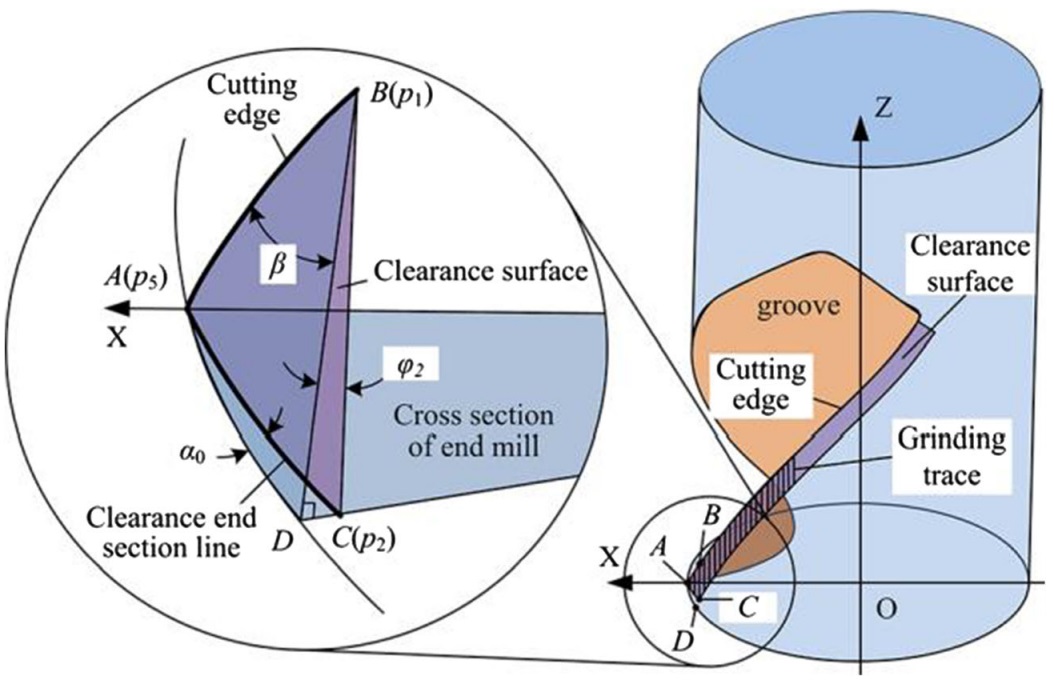 Fig. 7 Relationship between the clearance angle (α0) and the install angle (φ2)

from which it can be easily shown that

This equation shows that the inclination angle φ2 only depends on the helical angle β and the clearance angle α0.

It is obvious that only when the angle Φ’ is smaller than Φ will clearance be machined without interference. From Fig. 5b, we learn that the angle Φ’ is produced by line p1p2 and line p2p3 on the cross section of end mill. So, the calculation of the angle Φ’ is divided into two parts in the next studies.

①Analysis of surface produced by line p1p2 Substituting zgt=0 into Eq. (6), a relationship can be deduced as

Now, by substituting Eqs. (8) and (12) into Eq. (6), equation of the machined contour (p2p5 in Fig. 5b) produced by line p1p2 on the cross section of end mill is obtained. Then, the coordinates (xp5,yp5,0) of point p5 could be calculated through solving equations of machined and end mill contours.

②Analysis of surface produced by line p2p3 Substituting m1=0 into Eq. (6), the helical surface generated by the wheel circumference moving along the cutting edge is obtained in the form 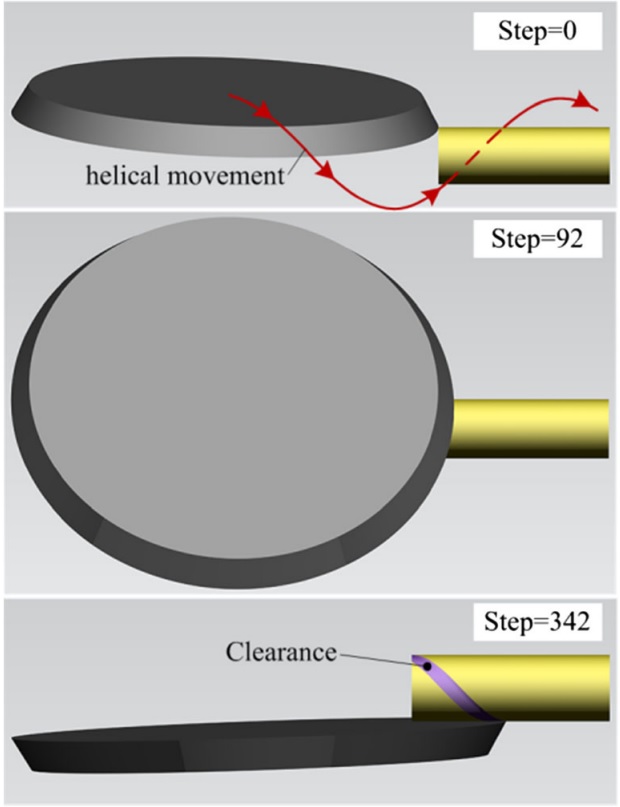 By solving the equation zgt(m1=0)=0, a function t= f2(m2) can be derived. Substituting it into Eq. (13), equation of the machined contour produced by line p2p3 on the cross section of end mill is obtained. Now, the coordinates (xp3,yp3,0) of point p3 are deduced. Based on the coordinates of point p5 and p3, the angle Φ’ can be expressed as

The approach mentioned above could obtain a precise value of Φ’, but the calculate process is very complicated. As the angle Φ’ do not influence the clearance geometry, a rapid evaluation method whose solution may have a permissible error will be more utility in practice.

Based on Fig. 7, the machined contour produced by line p1p2 on the cross section of end mill can be expressed as a segment of circular arc SAD, which is defined as

According to Fig. 5b, the machined contour produced by line p2p3 can be approximately represented in the form

Now, the angle Φ’ can be given by

Considering that mR, β, and φ2 are parameters of end mill which could not be changed, the wheel thickness gb is the only variable to reach the noninterference condition: Φ’<Φ. 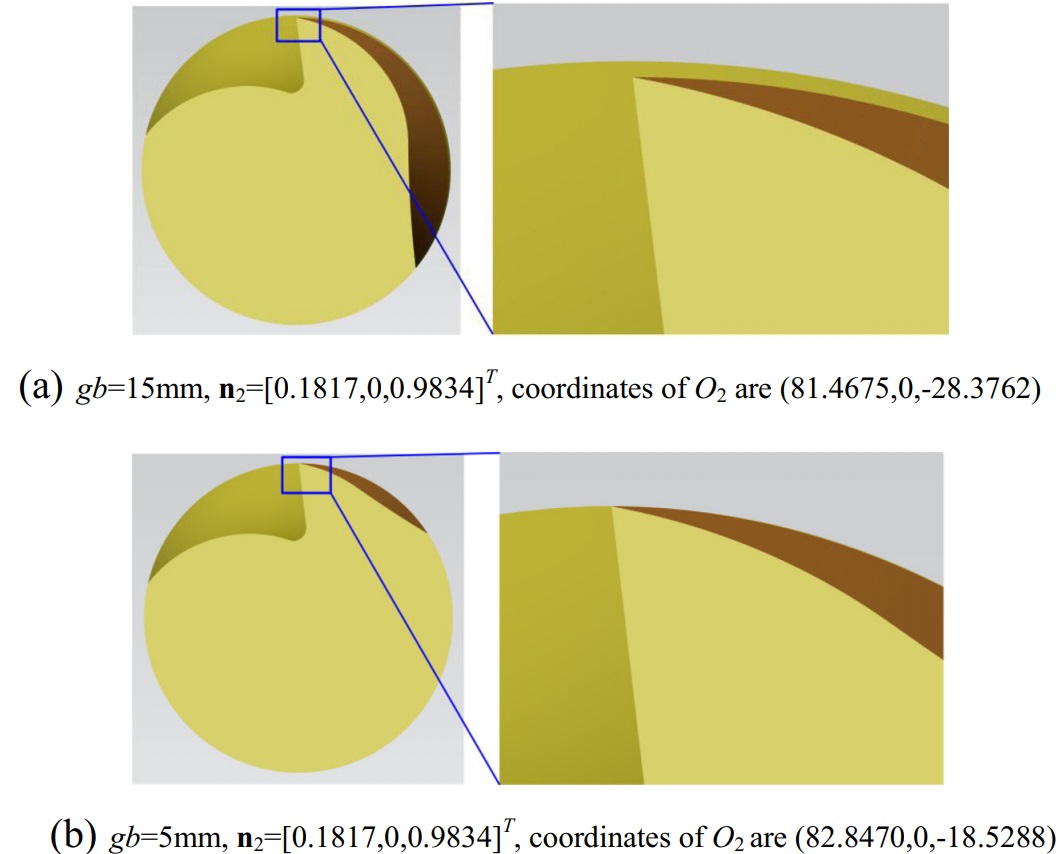 As shown in Fig. 1c, the wheel orientation used to machine the convex clearance is easily obtained in the form

and origin of the wheel frame is located at coordinates (xo3,yo3,zo3) 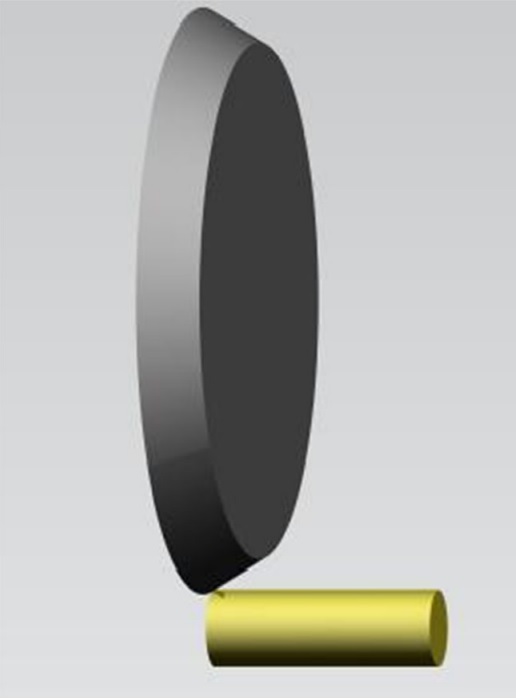 In order to verify the mathematical models established above, a clearance grinding simulation system is established by the UG secondary development technology. In the simulation, just like the actual grinding process, the wheel moves along a helical line (i.e., the helical cutting edge) step by step. Each step takes a Boolean subtraction operation: wheel as the “cutter” and blank as the “objective”. Then, the clearance model could be established by these Boolean operations (Fig. 8).

End mills with parameters of mR=10 m, p=60 mm, and α0=10° are taken as examples to verify the mathematical models. The wheels used in the examples have a radius of 75 mm

Based on Eq. (11), the inclination angle (φ2) of wheel used to machine the eccentric clearance can be deduced as 10.4675°. Fig. 11 provides the simulation process.

Based on the practical processes analysis, mathematical models for machining flat, eccentric, and convex shapes of clearance are established. Wheel orientations and locations are calculated and conditions to machine a desired clearance are discussed. Furthermore, a simulation system is developed to verify the mathematical models and visualize the machining process. The main conclusions are summarized as follows:

1. Examples show that mathematical models of clearance machining have been derived correctly.
2. For eccentric clearance machining, undercutting problems on the adjacent cutting edge can be solved by reducing the thickness of wheel. Furthermore, to machine a desired eccentric clearance, the envelope surface boundary should be coincided with the cutting edge, which leads to additional transformations for the wheel before starting the process.
3. Clearances obtained from the simulation program are solid models, which could be used as an input model for FEM analysis.

It is a project supported by the Important National Science & Technology Specific Projects (No.2012ZX04003-021) and “Taishan Scholar Program Foundation of Shandong”.
Back
A Performance Comparison Study of Uncoated and TiAlN Coated Carbide End Mill on Machining of the Al-35Zn Alloy The Influence of Different Types of Copy Milling on the Surface Roughness and Tool Life of End Mills